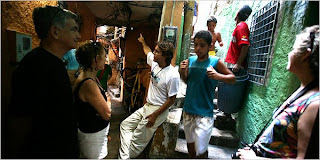 A tour of a favela in Rio De Janeiro
The New York Times wrote an article this week about poverty tours and whether or not that they were tourism or voyeurism. The article mentioned that there were tours in such cities as Rio De Janeiro, Johannesburg and Mumbai that all had tours to the lighted sections of their cities.

While some tourists feel that they can get the real experience of the city's culture through poverty tours, I can't help but feel that for the most part, all tourists will experience is a culture of poverty which can be a distortion of a city's real culture. Just as only visiting hotels and museums will not let you experience a city's true culture neither will visiting it's slums.

Often times, impoverished neighborhoods are not apart of the mainstream culture and have their own separate trades, economies, lifestyles and housing based out of necessity then a cultural or historical tradition.

Here's an excerpt of the article:

“Would you want people stopping outside of your front door every day, or maybe twice a day, snapping a few pictures of you and making some observations about your lifestyle?” asked David Fennell, a professor of tourism and environment at Brock University in Ontario. Slum tourism, he says, is just another example of tourism’s finding a new niche to exploit. The real purpose, he believes, is to make Westerners feel better about their station in life. “It affirms in my mind how lucky I am — or how unlucky they are,” he said.

What is your opinion of Poverty Tours?
Posted by Toure Zeigler at Wednesday, March 12, 2008

Labels: Around the World, Brazil, Inner-city