The City of the Future 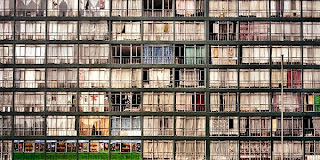 A tenemant building in Johannesburg

BusinessWeek recently ran an article about a book focusing on he ever expanding growth of mega cities called, The Endless City. The authors of the book hope that readers will view cities as sources of strength instead of isolating slums.
Here's an except of the artilce:

"The Endless City, a new book edited by the London School of Economics' Ricky Burdett and design curator Deyan Sudjic, aims to put urban expansion into perspective. The growth of cities, they argue, is not just a problem for local government agents or urban planners. Instead, urban growth is inseparable from major political and economic forces including globalization, immigration, employment, social exclusion, and sustainability (themes that track closely with the issues currently being debated in the runup to the U.S. Presidential election.)"

With people moving into major cities, such as london and New York, is it going to be possible for them to keep up on such things as waste removal? Here in baltimore our Wastewater pipes are running at over 75% capacity. I hope these cities are looking at such things. and i hope they are using smart growth instead of expantion.