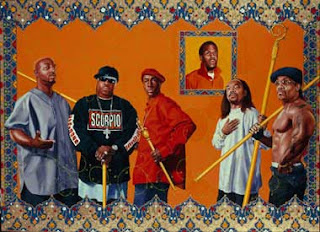 The National Portrait Gallery is showcasing an art exhibit about Hip Hop called Recognize: Hip Hop and Contemporary Portraiture that will focus on photography, painting, graffiti, film and poetry. As some of the older readers know, this blog focuses a lot on Hip Hop because it is the only American genre of music that was created from the inner-city with almost no outside influence from anyone outside of the city. This blog always like to show the intersection of Hip Hop with cities and city planning. Any exhibit showcasing Hip Hop will inherently show the art, creativity, culture and mindset of the inner-city.
An excerpt about the exhibit from their website:
"Since it's inception in the late 1970s, Hip Hop has become hugely influential in America. While the images of Hip Hop performers are as pervasive in our culture as the music itself, some visual artist have created powerful images that both celebrate and explore the complexity of this creative form. These six artist and one poet whose work is included in RECOGNIZE! have approached Hip Hop culture through the lens of portraiture, and, in combination, their contributions highlight it's vitality and beauty."
For more, click here to go the site's website.
Posted by Toure Zeigler at Monday, February 18, 2008