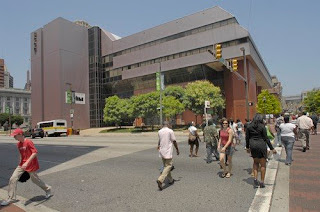 Main BCCC Campus Building
The Baltimore Sun reports that the Baltimore City Community College (BCCC) is seeking to sell it's downtown campus to developers for revenue for additional space elsewhere. The possible development of this site would have a major impact not only on the continuing redevelopment of Baltimore but on public education itself. The selling of University land for prime real estate is starting to become a national trend. The University of South Carolina recently announced that it is constructing two condo buildings with unit prices that range between $750K and 1.5M and the University of Pennsylvania is helping to redevelop a Philadelphia riverfront with a development price tag well over $1 Billion dollars.

Back to Baltimore, while allowing 2.2 acre campus site to possibly redevelop would bring more night time and weekend activity to the area it can not be understated that the popular campus itself brought a lot of students to the area as well. A major concern for the BCCC or for any city community college would be location for all it's residents and students. Preferably one would like to have a community college near downtown or within close proximity, tucking a the location of the campus to East Baltimore as BCCC is proposing to, really isn't accomplishing that goal.

Hopefully, the new location of the campus will be placed near a proposed Red Line metro stop giving all students a chance to get to the campus using major transit. As many Baltimore transit riders will tell you, commuting from east to west and vice versa on transit is a horrible and long commute. As for the redevelopment of the site, one hopes that a developer will propose something that will positively connect Power Plant Live with the new development along Pratt Street and the existing development along the Harbor.

On the flip side, some urban campuses like ODU in Norfolk and of course, JHU, have been accused of the opposite - buying up real estate in poor neighborhoods for the purpose of campus expansion.