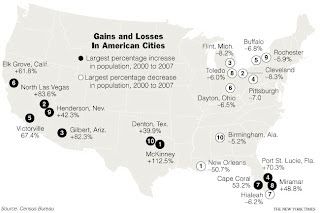 The census report for population growth was recently released and as the New York Times reports, many older cities continue to see their ups and downs. The only major East Coast or Rust Belt city to see a significant net increase was New York City. However it should be noted that since 2000, NYC has lost over 200, 000 residents.
As the trend has been since the 1970's Americans continue to move to the Sun Belt and suburban locales. Small to medium sized cities in the South and West have now become major cities as seen with Phoenix and San Antonio, which are now the nation's 5th and 7th largest cities. Houston, the nation's 4th largest city has now ballooned to 2.2 million people and Atlanta is one of the largest Metropolitan regions in the country. Surprisingly, Washington D.C., the nation's capital is no longer within the top 25 largest cities in the country.
As planners, this should be rather distressing. In my opinion many of the "cities" out west are just amorphous jurisdictions that happen to capture an urbanized place and it's suburban surroundings. In no way can these cities be compared to the traditional cities in the east or even the instant growth cities we see in China and in other parts of Asia. These blobs of cities are uniquely American and given the sheer land mass of their size have the lowest populations densities of any city found in the world. By Comparison, Phoenix, the 4th largest American city which has approximately 75,000 more residents then the 5th largest city, Philadelphia, is over 2.5 times the larger then Philly in total square footage. In order for Philadelphia to be of the the same square footage as Phoenix it would have to absorb it's entire neighboring county.
One does not have to tell you that the need for sustainable neighborhoods and cities is greater than ever. One has to look no further then the local newspaper to look at inflated gas prices, the mortgage crisis and a weakening infrastructure that we have to change the way we develop cities. It's not only up to the planners but it also up to the people to reform their ideologies of desirability and realize the desires of a green pastures and McMansions is not a sustainable way of life.
To read more of the New York Times article, click here. And as always, please leave a comment.
Posted by Toure Zeigler at Wednesday, July 16, 2008