A Historic Day in Baltimore 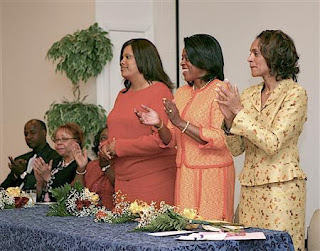 For the first time in history, four women - more specifially - four African American women, hold the top four positions in a major American. The top four positions are the City's State Attorney (Patricia Jessamy), the Comptroller (Joan Pratt) and the City Council President (Stephanie Rawlings-Blake) and the Mayor (Sheila Dixon) who were both sworn in yesterday.

Let's hope the women will have better luck in planning the city then the men have in the past 150 years.