Despite many proposals within the last 40 years to save this mall and it's historical crossroads Old Town Mall continues to crumble. The community which was founded in the 1660’s and intersected the historic travel routes and commercial corridors of Greenmount/York Road and Gay Street/Harford Road was a vital commercial and industrial hub through the mid 20th century. In the 1960's under the guise of Urban Renewal, Old Town became the first mall next to public housing projects. In the 1970's, an interstate was constructed leaving the mall in shadows and in the 1990's, the public housing projects were razed leaving the mall with no residents. The history of inner city Baltimore can certainly be told through the history of Old Town Mall. 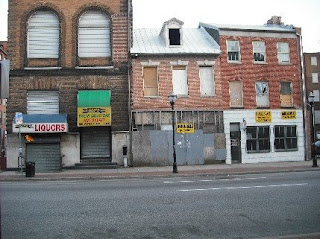 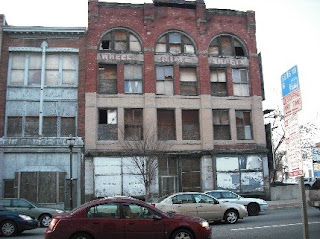 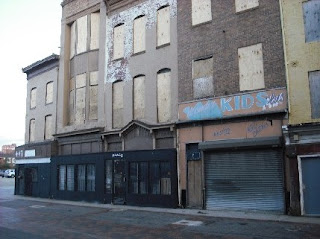 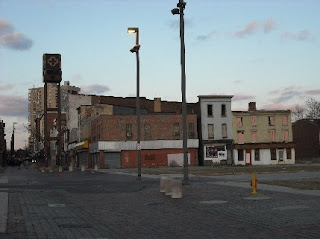 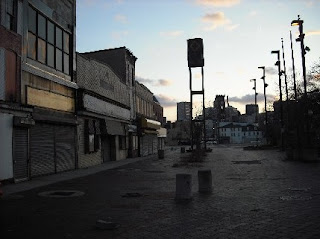 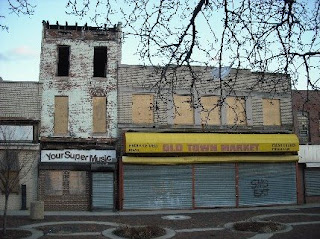 All pictures courtesy of the Baltimore Examiner

The historic neighborhood borders the city’s downtown and has long been a highly dense community that once was one of the city’s hubs for industry and commerce due to it’s close proximity to downtown. There are still several existing structures in the community that date back to the 19th and early 20th century that reflect the community’s once industrial character as evident with historic Shot Tower. The Old Town Mall stands on the site of the Old Town neighborhood which almost predates the city itself. The site of the Old Town Mall formed as a food market in 1813 which sparked the neighborhood’s growth and became a pedestrian mall under Hope XI in 1968. At that time, Old Town mall was the only mall in America to be located in an impoverished neighborhood as the site was almost completely surrounded by housing projects.

Almost like no other neighborhood in the city, the current condition of the Old Town community is a reflection of deep scars of failed urban policy locally and nationally which this community took the brunt of those failures. From two notorious housing projects which were eventually tore down in the mid 1990’s to the continued construction of I-83 in the 1970’s which further isolated the neighborhood from downtown, the community to many people was a blighted eyesore. An eyesore that stood in stark contrast to downtown Baltimore’s reemergence and new skyscrapers which were just blocks away from the crime ridden neighborhood.
.
This community has undergone significant changes within the last ten years from the State’s new Juvenile Justice Complex to the major redevelopment of the Lafayette Court and Flagstaff housing projects into low scale townhouse styled apartments. Unfortunately, there are still very visible vestiges of the community’s past struggle. The community is still home to public housing or public assisted housing and Old Town Mall is at the intersection of a very heavily traveled intersection is more blighted than ever and is a virtual ghost town surrounded by blighted buildings, empty parking lots and dirt lots.

The community’s decay and blight was not hidden or intertwined through a mass of interior city blocks but where on full display on the cris-crossing of several major arterial streets. The community quickly became a collection of unwanted land uses from acres of surface parking lots, the constant activity of the central post office, an expressway, a Juvenile Justice center, a homeless shelter and of course a concentration of public housing. Whatever that was unwanted somehow settled into that neighborhood at some point in time. This can be seen by the tent camps of homeless people who live in the community under the I-83 Expressway. Perhaps the neighborhood’s greatest weakness was not that it was decaying and impoverished but that it did not decay quietly. The neighborhood decayed before everyone to see who came downtown…and did so violently.

But perhaps the neighborhood’s greatest weakness can soon become it’s greatest strength. There is no reason that a neighborhood adjacent a downtown, a regional expressway, two subway stops and that is located on major arterial roads some of which are just blocks from region’s largest employer can not turn itself around.
Posted by Toure Zeigler at Thursday, March 05, 2009

I am the daughter of a long time family owned meat business in Belair Market (Old Town)I spent many of my early days there and they are all wonderful memories. So sad.

One thing you left out was the fact thy turned the main street into a pedestrian mall sometime in the late sixties or seventies. This was during a time they did this ll over Baltimore; taking thriving mixed use districts and trying to turn them IMO pedestrian spaces, presumably to compete with suburban strip malls in the wake of the riots. At the same time, they were butchering the organic city street grid, throwing up massive office blocks connected by dead and empty plazas and sky walks, which were supposed to separate people from the street, as though that would be safer or produce a desirable outcome.

I've read nearly every Baltimore development co and rouse company and architectural planning document from the late fiftes until the eighties in an effort to understand exactly what their thinking was t the time. I'm not a planner or involved in civic politics or nothing, just a residen who loves the city. The planning proposals showed little because they were all reverse rationalizing some decision already made, so I trawled the shelves to understand more. A couple books helped, the Baltimore rowhouse by Hayward and a book about blockbusting on the west side, more understanding about the riots, etc.

Bottom line to me is that this glorious city was deeply wounded by a very powerful oligarchy whose intentions were not bad but whose myopia was fueled by fear, racial politics and change, impending industrial collapse use to technology, the immediate interests of the professional real estate class, and the fact that it took a while for folks to learn how to organize and fight at the grass roots. Before mikulski came along, they'd already done a ton of damage and old own is only one of the most visible results.

Great blog, thanks for listening to an amateur. :)

Sorry for my typos, I'm on a touch screen, not illiterate (mostly) :)

Old town mall is the only place that we can call home because when we went their that is where we were surrounded by all the people who love and help raise the children . I hope that they bring the stores back because that is what helped families because they were able to go to stores without traveling far to get quality goods, and yes it is surrounded by public housing but do you think when we spend money it matter? Give the people back what they always known as their place of happy times bring back our stores and bring back our gathering place, because crime is happening every where and not just around our mall the home of the public housing.
Every other neighbor hood has a market were families can buy fresh and healthy foods but the people here relies on the gas station for food such as milk, eggs bread. the people to travel long distance when most of them do not own a car. On any given day you can see an elderly women carrying her bags or a young child starting at age of 4 helping their single mother and the mother is struggling with the child and her bags crossing the street. Bring back the shopping area for this community.