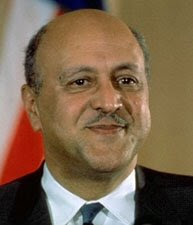 Listed below is a short biography of Robert Clifton Weaver who was the nation's first Secretary of Housing & Urban Development (HUD) under Lyndon Johnson and also the first black cabinet member. For a more in depth of analysis of Weaver's life, accomplishments and disappointments, I encourage everyone to read this article from The Nation.
From the article:
"The New Deal and Great Society policies that Weaver defended only sometimes fulfilled the promise he thought they held for African-Americans, and even then they did so mostly under the pressure of mobilization rather than from the patient and steady work of insiders like him. For all he accomplished during his remarkable life, Weaver emerges as an ambivalent success in Pritchett's book, a man whose greatest dream, that government action could ameliorate the poverty of African-Americans in the country's cities, remained in many ways unrealized."
.
Bio:
Housing administrator, cabinet member. Born Robert Clifton Weaver on December 29, 1907 in Washington, D.C. Weaver received a doctorate from Harvard University in 1934 and served as a member of President Franklin Roosevelt's informal ‘Black Cabinet’ from 1933 to 1942.
.
Weaver was a New York housing commissioner from 1954 to 1959 and a Federal Housing Agency administrator from 1961 to 1966, co-writing The Dilemma of Urban America in 1965. Under President Lyndon Johnson, Weaver served as the first United States Secretary of Housing and Urban Development (also known as HUD) from 1966 to 1968. He was the first African American cabinet member in US history.
After leaving his cabinet post, Weaver became president of New York City’s Baruch College in 1969. He then served as a professor of Urban Affairs at Hunter College in New York until 1978.
Posted by Toure Zeigler at Monday, February 02, 2009