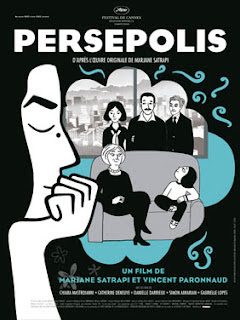 Persepolis is based off a graphic novel about a young girl growing up in Tehran, Iran during the political fall of the Shah dictatorship and the ensuing war with Iraq during the 1980's. (View the trailer)
The film shows the main character, Marjane, a bright and curious girl who is raised by an educated and politically active family whose members strive for freedom and democracy. The films shows that while the dictatorship had it's own brutalities and injustices, the rise of religious fundamentalism made life much worse in a very metropolitan Tehran and Iran as a whole. While the Fundamentalist movement killed or jailed all of it's opposition it also squashed almost all forms of personal expression and individual freedoms especially for women.
The film showed how a somewhat cosmopolitan city could be transformed into a military state where all citizens are suspects. How simple men could rise from nothing to positions of power just by having a dogmatic faith. One thing that was very intriguing in the film is how the functionalities and layers of a city could be used to control it's own cities. Unlike a rural setting, city dwellers take for granted that some one or some power controls everything from your water, power, protection and of course education. What can a city dweller really do if a government tries to control or manipulate it's citizens through the basic functionalities and infrastructure of a city?
People form cities or come to cities with the basic understanding that everyone will share in the responsibility of maintaining the infrastructure and costs of that city for the shared interest of creating a better society through personal wealth, education, culture or all the above. But what happens when a force comes in and no longer shares that vision of creating a better society. Is that place still a functional city if the basic premise of creativity and culture is taken away?
.
Even if you have not seen the movie, please let us know what you think about the importance of not altering the creativity and cultures of cities.
Posted by Toure Zeigler at Sunday, April 13, 2008

Labels: Around the World, Politics