Michael Jackson was wrong, apparently it does matter if you are black or white according to these maps: 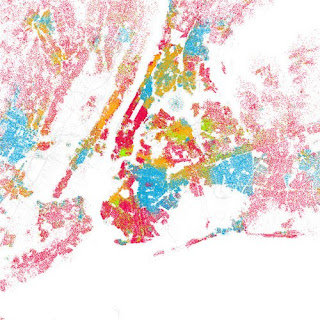 A racial integration map of NYC

Photographer Eric Fischer's color-coded maps of racial segregation are captivating, particularly once you find your own neighborhood. A look at his work follows after the jump, courtesy of Fast Company's Cliff Kuang.

Eric Fischer saw those maps, and took it upon himself to create similar ones for the top 40 cities in the United States. Fisher used a straight forward method borrowed from Rankin: Using U.S. Census data from 2000, he created a map where one dot equals 25 people. The dots are then color-coded based on race: White is pink; Black is blue; Hispanic is orange, and Asian is green. 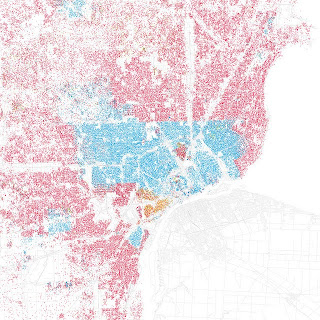 These maps are pretty interesting and show how much progress some cities have made toward integration and how far some cities still have to go. What's interesting is that in some of the more liberal cities like New York City and Washington D.C. there are still hard division lines when it comes to race. In southern cities, where people tend to think there would be more segregation but in southern towns and cities black neighborhoods and white neighborhoods have almost always been in close proximity to one another...even if they were completely seperate. But these neighborhoods would share the same main streets and downtowns as opposed to cities in the Northeast where black neighborhoods have their own seperate main streets, commercial corridors and malls.
Posted by Toure Zeigler at Tuesday, September 21, 2010