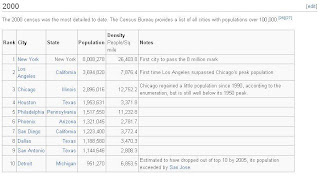 A lot of people have been dumping on Detroit bringing up a myriad of negative statistics (such as the average housing price for the city is below $20K) about the struggling city. With abandoned skyscrapers and so many vacant parcels that have been reclaimed for farms, it is easy to get the perspective that Detroit is a ghost town. In Actuality it is a top 10 city with over 950,000 residents making it significantly larger then cities such as Atlanta, Denver and D.C.
Despite Detroit losing more then half of it's population since 1950 and the city of Houston almost doubling since the same time, Detroit still has more than twice the density of Houston according to the 2000 census. So go figure, even a shelled out city has more density then a sprawled out city.
Posted by Toure Zeigler at Wednesday, April 01, 2009

I agree with your comments about Detroit's better land use concerning density, especially in comparison to the sprawling, monstrous behemoth that is Houston (cheap houses tho), but in terms of economic importance, I think that many smaller cities like Seattle, Atlanta, Minneapolis, Pittsburgh have much more robust economies and I daresay great economic regionally and nationally than Detroit does. Of course, I take into account the demise of the auto industry, but on the diversity of economy, Detroit still loses out to those smaller, but more potent cities.

I think the ghost town argument, which thanks to the current economy you could expand to include Cleveland and even Atlanta, is due to the fact that Detroit could fit many MORE people. It looks like it has the capacity to house at least 1.5 million, and Cleveland .9 million. Yet both cities have so many empty houses that they have had to resort to BULLDOZING homes. It's crazy

I think that many smaller cities like Seattle, Atlanta, Minneapolis, Pittsburgh have much more robust economies and I daresay great economic regionally and nationally than Detroit does.