Returning Detroit Back to Nature 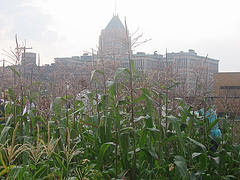 A recent AP article covered what I think is one of the most fascinating "urban renewal" projects occurring in Detroit right now, which is Urban Farming. With the city's population less than half of what it was in 1950 there are thousands of empty lots in Detroit that are being converted into mini-farms.
The AP article quotes:
"With enough abandoned lots to fill the city of San Francisco, Motown is 138 square miles divided between expanses of decay and emptiness and tracts of still-functioning communities and commercial areas. Six barren acres of an estimated 17,000 have already been turned into "mini-farms," demonstrating the lengths to which planners will go to make land productive."
To me the irony of Detroit, one of America's most industrialized cities where car production was revolutionised which created negative environmental conditions such as smog and helped cities decentralize only to be converted back into a farm is fitting. We have all seen the Disney Cartoon of the little house that eventually got surrounded by the big city but we have never seen the big city go into reverse. The only times we have seen big cities go in reverse are in a apocalyptic fantasies where nature consumes cities after the people have vanquished. But to see the people return the city into a farm has to be a new chapter in the history of city development. Could this be a new chapter in city planning history that the fate of all cities could face that somehow Detroit had fast forwarded through time to reach this eventual conclusion?
The last question posed is very interesting because while Detroit is one of the biggest cities in the rustbelt of the U.S. it is not alone in the declining population and property value of it's city. There are dozens of small towns and cities across Michigan, Ohio and Pennsylvania whose fates were dependent on industry which appears will never return. Can Detroit be a model of a new green city in the rustbelt? Can these industrial towns despite the decades worth of toxins in the ground actually produce a life sustaining farm? I was always told by planning professors that once farmland is developed that it can return back to farmland again - is Detroit proving that theory wrong?
What is your opinion?
Posted by Toure Zeigler at Monday, December 29, 2008

This only seems appropriate to an age that is in dire need of food, rather than more transportation. Cities like Detroit may be shrinking but they may also be about to realize a more productive, self-sufficient future. Urban farming is a positive move. See my blog posting at http://bit.ly/17ELt

I agree Urban Farming is more spostive the only problem for Detroit is that it's suburbs keep expanding. In order for urban farming to be really productive, open space in the periphery has to be left alone and development should go back and infill lots where the infastructure is already in place.

True. What's surprised me is that yields of food from quite small scale spaces can be quite high. But the challenge remains to win sufficient acreage and put in the commercial infrastructure for local demand i.e. work with the social sector, for instance, to establish community or social enterprise restaurants that could buy produce from suppliers. But also local agencies to instigate preferential procurement of locally produced food. The model for all of this, as you'll know, is in Cuba.

I always like the idea od social enterprise with farming communities. I know they Pennsylvania has a similar program with area farmers and inner city commnities who buy their products.