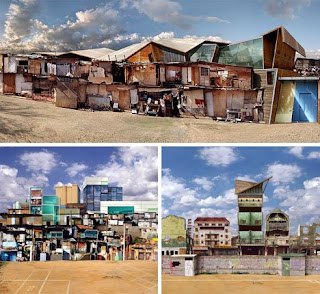 Yes, these are real … and yet entirely unreal at the same time. After traveling extensively through the shanty towns of Sao Paolo and Río de Janeiro, Brazil, artist Dionisio Gonzalez has constructed a series of photographic collages that blend imagination and architecture, a kind of hyper-real Alice-in-Wonderland representation of the hodge-podge urban reality around him. 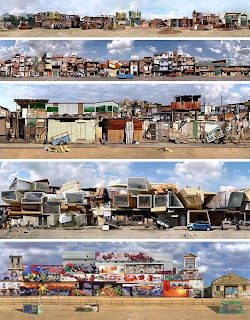 His work is not just artistic or theoretical commentary – it is a semi-concrete vision for the possible restructuring of shanty towns. He has imagined and proposed a reuse of the spontaneous constructive elements of the existing structures in mass settlements to create controlled hybrid-but-functional communities of the future. 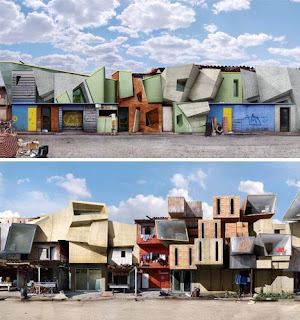 The artist’s critique and proposal are based on his observation of the slash-and-burn tactics of the Brazilian government which, when it intervenes, simply swoops in and sweeps areas before rebuilding utterly – at the expense of the shared structural history of an area that might not be ideal but is what many people call home. 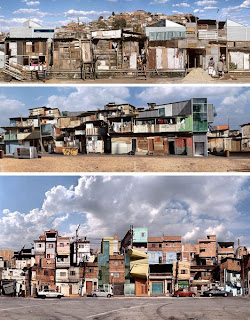 González tests out various configurations, scales and stylistic combinations in his compelling series of collages – in part an aesthetic exercise but also an attempt to take the real materials he has photographed and find new ways to recombine them for new purposes. His work has won him international recognition and awards. 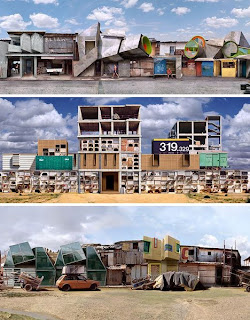 Labels: Around the World, Art, Brazil