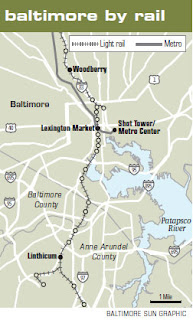 Whenever you start off your endorsement of public transit system in Baltimore by titling your article, "It's not easy, but it can be fun, to use Metro, light rail," you are kind of bound to fail for a ringing endorsement.

"The big flaw of these systems is that they don't interconnect particularly well. They come close at two points - near State Center and at Lexington Market - but there's no such thing as a real hub. That doesn't render it useless, though."

As one transit critic told me years about Baltimore Transit, "it's not a system, it's more of a collection of transit lines." Not having a transit hub and having major rail run on only one side of the city does make public transit almost useless for those who do not live near the Metro or Light Rail. As someone who grew up on the eastern side of the city and the county I always found it maddening that there is not a duplicate heavy rail line that extends to White Marsh as the Metro extends to Owings Mills. In fact it would take me 10 minutes to drive to the nearest Light Rail or Metro stop and by that time I could already be halfway downtown by driving.

The other gem of the article about transferring from the Light Rail to the Metro:

"To get there, we transferred from the light rail to the Metro at the Lexington Market station - a block east of the actual market on depressing Howard Street. The Maryland Transit Administration doesn't make switching easy with its tiny, poorly placed signage, but it can be done..."
"...We could have taken the subway back to the light rail line, but by then darkness had fallen, and we weren't too eager to wander around Howard Street."

Good ole' Howard Street, the dying commercial corridor that was killed during the construction of the Light Rail. I know many of Planners and developers have tried to revitalize Howard Street and there has been significant work done to improve the streetscaping to Howard Street and Lexington Market but...Try Harder! Seriously, Howard Street is poorly lighted and feels desolate. For a major artery to a downtown area, I feel like I could be mugged and left in the middle of the street for hours before anyone would find me.

Enough of my thoughts, what is your opinion?
Posted by Toure Zeigler at Tuesday, December 23, 2008

I recently came across your blog and have been reading along. I thought I would leave my first comment. I don't know what to say except that I have enjoyed reading. Nice blog. I will keep visiting this blog very often.

I'm originally from Baltimore but moved to DC 25 years ago. I produce informal videos about Urban Design projects. With the beginning of the Obama administration the timing is opportune. I moved my offices to Pennsylvania Avenue NW. 8 blocks from the White House. We are planning to produce online programming relating to urban planning, locally and nationally. Perhapes there may be something in what you do that overlaps in our interests. A short intro can be seen at www.urmewashdc.tv. I was wondering why you don't have a personal picture online.

Urban Revival Media, your site looks great and I would definitely be interested in being involved with one of your videos.